Online Repository of documents on the social impacts of culture

The University of Barcelona, partner of MESOC project and coordinator of WP4 “Transition based impact assessment method”, has released the first version of the online repository of documents on the societal value and impacts of cultural policies. The collection of relevant literature covering the 3 cross-cutting dimensions of the project – Health and Well Being, Urban and Territorial Renovation, People’s Engagement and Participation – is one of the first and fundamental steps to create the foundations for the theoretical framework of MESOC and one of the permanent legacies of the project.

This first edition of the repository is the fruit of a collective effort among the research partners of the consortium. Researchers collected 150 documents, focused mainly on conceptual and empirical research documents in English. Two more updates of the repository will be released on months 21 and 36, respectively, and will cover a wider variety of documents (including “grey” literature and local cultural policies) in several languages.

A first interesting result of the literature search is related to the year of publication of the analysed documentation. As illustrated in Figure 1, it seems that the topic of social impacts of culture has gained popularity, especially over the last years. Indeed, 45% of the total analysed documents (67 out of 150) have been published in the last five years (2016-2020), thus remarking the increased relevance of this topic and a diffuse need to advance in the research in this field.

Figure 1: Documents per years of publication 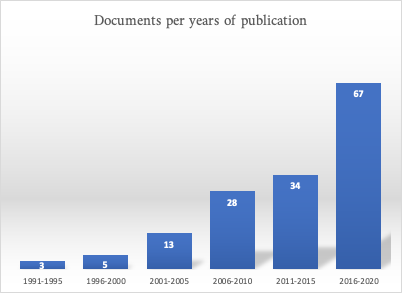 The report also analyses the distribution of the three cross-over themes of the MESOC project (Health and Well Being, Urban and Territorial Renovation, People’s Engagement and Participation) in the selected literature. As highlighted in Figure 2, the literature on Health and Wellbeing seems to be prevailing (45%), followed by documents on the topic of People’s Engagement and Participation (28%) and Urban and Territorial Renovation (21%). This first result seems to confirm the hypothesis expressed by some authors (cf. Azevedo, 2016)[1] that research have tended to focus on subjective and individual impacts rather than collective and territorial effects. 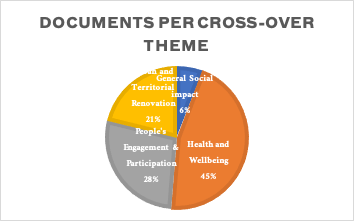 In terms of cultural sectors, Figure 3 represents the percentual distribution of the 10 cultural domains identified by the EUROSTAT’s ESSnet‑Culture report. If we exclude documents analysing the general cultural dimension (35%), the most represented cultural sector of the sample is performing arts (25%), followed by visual arts (10%), audiovisual and multimedia, and heritage (7% respectively). 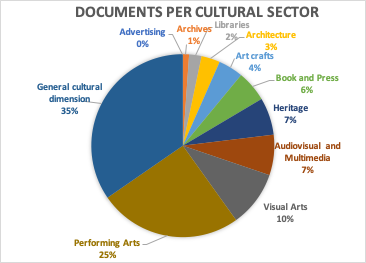 [1] Azevedo, M. (2016). The evaluation of the social impacts of culture: culture, arts and development. Economics and Finance. Université Panthéon-Sorbonne - Paris I.