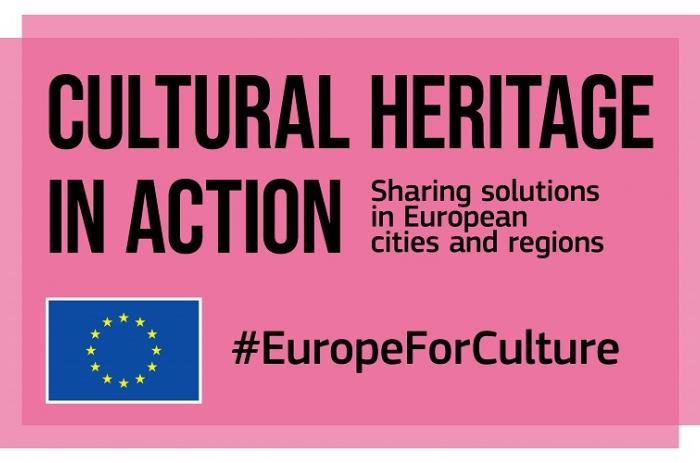 Cultural Heritage in Action project, what is it?

Cultural Heritage in Action is one of the actions of the European Framework for Action on Cultural Heritage of the European Commission. This project is a peer-learning programme that allows more than 100 local and regional policy makers to share and exchange knowledge on cultural heritage, with a specific focus on governance, adaptive reuse, and quality of interventions.

The project focuses on three main topics that have become increasingly significant over the last decades for societies ‘development. These are:

Preserving cultural heritage is a crucial activity to guarantee to future generations to enjoy this inheritance. In fact, interventions on cultural heritage, when not appropriate, can risk damaging it or put it in danger. Proper quality interventions are the outcome of several factors such as aesthetics, habitability, environmental friendliness, accessibility, integration into the surrounding environment and affordability.

Who is participating and what has been done so far?

Throughout the past 18 months, Cultural Heritage in Action project has:

The consortium is led by EUROCITIES with KEA, ERRIN, Europa Nostra and Architects’ Council of Europe and the project is funded by the European Union’s Creative Europe programme from January 2020 to June 2021.

In the next section we will provide an overview of three meaningful projects carried out within the Cultural Heritage in Action activities, all dealing with topics connected to MESOC. These have been hosted in the city of Vantaa, in the city of Kortrijk and in central Scotland.

ONLINE PEER-LEARNING VISIT HOSTED BY THE CITY OF KORTRIJK (BE)

Citizen participation and participatory governance have become crucial themes in the cities’ agenda and the demand for projects with a strong orientation toward the co-creation process is rapidly growing.

Kortijk, a city in the southern West-Flanders, has experimented for years with a project focused on citizenship engagement and participation wearing a creativity lens.

The online peer-learning visit focused on cultural heritage as a driver to boost co-creation processes: key elements of discussion were the impact of artistic interventions on civic participation, the role of cultural institutions in triggering it and mostly how to make citizens participation lasting in the long term.

To answer these questions, the visit adopted cultural and artistic interventions to guarantee citizens’ participation and engagement in the decision-making process. This has been done not only through artistic actions such as photo exhibitions and performances, but also through the involvement of citizens in the development of the cultural strategy for the nomination of Kortrijk as European Capital of Culture in 2030 and moreover through some initiatives promoted by the local cultural institutions to create sense of identity a belonging.

Some of the projects presented can be summed up here:

1) Participation and co-creation through artistic interventions

Emma the small giant (for more info, click here): a remake of an ancient tradition to reflect on new social challenges, notably social inclusion, and cohesion. Thanks to this action many local industrial design schools, visual art schools, primary schools and local artists have been involved in the process-making activating participation and sense of stewardship.

Towards a future museum on identity in Kortrijk: Kortrijk has decided to build a museum on identity. The idea is to show how citizens can engage in cultural activities and how local stories can be shared with a strong emphasis on inclusion. It is a way of reinventing the past while building an identity with an emphasis on social inclusion and diversity: in fact, 127 nationalities live in Kortrijk and non-Belgian citizens represent almost 10% of the total population. The museum wants to become an innovative, low-threshold, high-level art site with identity as its central theme.

Participation in developing a local cultural strategy: DURF2030: Kortrijk is contending for the European Capital of Culture title in 2030 using a strategy of policy development in co-creation with citizens, businesses, associations, and organizations as well as the cultural sector. To do so, they set up a platform, DURF2030, to collect and promote voluntary participatory artistic and cultural projects able to trigger positive changes in the community with the aim of showing the power of arts and culture to produce a transformation led by the citizens.

ONLINE PEER-LEARNING VISIT HOSTED BY THE CITY OF VANTAA (FI)

Developing a vibrant cultural environment is a fertile humus for societes’ development. Vantaa is a dynamic city near Helsinki, where the preservation of its historical and cultural environment has been a key resource to promote sustainable development,improve people’s quality of life and strengthen cohesion and inclusion. To pursue this goal, they have developed a co-design process to support the creation of a  Cultural Environment Programme. Cultural environment is the human built or human influenced environment like places, landscapes and built heritage that is relevant for the identity and well-being of the people.

The project’s strength stands in the ability of involving several aspects jointly: in fact, it has an impact from the urban development and inclusion perspective, from a governance perspective and lastly from a social cohesion and well-being perspective.

The urban development and inclusion perspective

The idea of the project is to link the cultural environment with policy areas like education, culture, real estate, tourism and entrepreneurship by being a vehicle to mobilize local resources.

Furthermore, this programme foresees using cultural environments as tools to create integration and inclusion by creating a welcoming environment for newcomers and migrants. Additionally the programme sets up a strong cultural offer to make the territory more attractive and activate tourism and local economies. This latter point suggests the importance of cultural investment to produce impacts on the economic scale.

The programme was implemented following a collaborative approach, engaging residents, associations, local business, several policy departments and stakeholders from regional, national and international level.  A participatory approach allows actions and programmes to be implemented with the politics support and with the collaboration of cities’ administration.

The Co-design strategy required several steps that go from the definition of the city’s expectations from the co-participation process, the identification of the stakeholders to engage, the set-up of a cross-sectoral collaboration between the administration units (i.e. the city planning department and the museum and environmental services), define a low-threshold to engage residents in the activities participation, the creation of  awareness about the cultural environment in the young generations through gamification and other engaging tools. In order for the programme to rely on the role of culture in spreading awareness and foster interest upon this theme, museums have been identified as key actors standing as “lawyer representative” of the cultural environments.

The social cohesion and well-being perspective

Culture plays a paramount role in increasing well-being in the community. For this reason, the community is actively taking part in the programme to be a driver of the change. However, albeit several stakeholders such as the social department of the city, has been left apart from the decision-making process, these programmes seem to be crucial to pave the way to new forms of co-design processes.

The Antonine Wall, part of the Frontiers of the Roman Empire together with the German limes and the Hadrian Wall is a World Heritage Site located in central Scotland. The aim of the visit was to highlight the importance of cultural activities to regenerate disadvantaged communities working as catalysts of social and economic development. In fact, The Antonine Wall runs through poorer neighbourhoods in urban and rural areas.

The Wall is a 60 km site that cuts across five councils and one city in central Scotland. The project was based on significant regeneration and place-making actions involving the communities’ in a co-design approach to pursue two objectives:  capital projects and revenue projects, both designed to make the Antonine Wall more visible and more relevant to local communities (click here for more information).

Rediscovering the “Antonine Wall” effort has been to cope with a complex political and administrative landscape; for this they decided to build up a partnership with five municipalities along the line of the wall and the community engagement in process has been a cornerstone of good practices based on open consultations, events and a continuous dialogue between all the actors involved.

The Pandemic situation has affected the methodology of the project forcing it to adopt online tools for community engagement objectives. The success of the project relies on several aspects that need to be taken into account when setting up a co-design process.